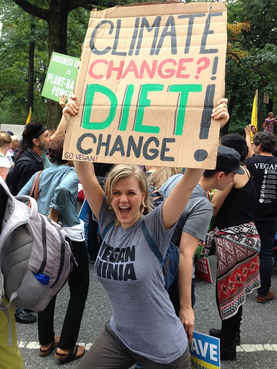 At the People’s Climate March last Sunday, an estimated 400,000 people came together in New York City to call attention to the severity of the climate crisis. The occasion for the march was the UN Climate Summit on Monday, which gathered world leaders from government, finance, business, and civil society at the behest of Secretary General Ban Ki-Moon, with the stated goal of initiating some substantial commitments to reduce emissions in the run-up to the COP21 climate meeting in Paris next year.

Coinciding with marches in 156 countries, the march in New York was the culmination of months of organizing and weeks of workshops, teach-ins, film screenings, and other side events around the issue of climate change.  These events brought together a diverse range of groups, from nonprofits to artists, academics, labor unionists, community activists, and average people concerned about climate change.

‘Food justice’ was one of many contingencies, or subgroupings, in Sunday’s march, situated within the broader section “we have solutions.” With livestock as one of the main drivers of climate change, it would have been fitting for the livestock-climate issue to be central to both the food justice contingency and to the march in general. However, given that this is by no means a  mainstream cause among environmentalists, let alone the general public, it is perhaps as unrealistic as assuming leaders would agree on substantial emission reductions at this summit.

Unsurprisingly, activities within the food justice contingency leading up to the march were mostly void of the livestock-climate issue, with the exception of side events with the environmental organization Brighter Green. Most food justice messaging mirrored the  priorities of the so-called ‘Good Food Movement,’ which emphasizes local, organic, GMO-free food and holds grass-fed beef in high regard — even though grass-fed beef has one of the highest emission and land footprints per pound. While well-meaning Good Food activists have many noble goals, and have helped millions of Americans rethink ethical issues related their food, they are a bit out of touch when it comes to food and climate change. They not only give a lower priority to the issue, but tend to focus on ‘food miles,’ even though the distance food travels to the consumer constitutes a small percentage of total food emissions.

At the front of the food justice staging area of the march, signs with Good Food messaging such as “Cook organic, not the planet” were dominant, with only a few livestock-climate signs. However, 100 yards north through the crowded streets of marchers, livestock-climate signs were very prominent, with marchers in this camp occupying almost half of a densely packed block. The messaging in the signs and banners was predictably witty — for example, “Can’t stand the heat? Cut out the meat!” — but also surprisingly nuanced and in tune with some of the serious issues related to livestock and climate change; excluding duplicates, there were at least eight different iterations of signs and banners that mentioned the calculation by Robert Goodland and Jeff Anhang that livestock are responsible for at least 51% of man-made greenhouse gas emissions in carbon equivalents. Another common message in this section of the march was that plant-based diets were the only ones worthy of being considered environmentally-friendly.

A cohort of people organized around a large banner reading “Animal agriculture is the #1 polluter” and a fifteen-foot tall inflatable cow with a sign that read “I’m full of greenhouse gas, do you have a steak in it?” Peta called attention to the climate and water impacts of livestock under a banner that read “Meat: the biggest drain on the earth.” Vegan Shift provided marchers with hundreds of free t-shirts that read “Vegan,” extolling the virtues of a plant-based diet for people, animals, and the planet. But perhaps most impressive was the number and variety of signs that individuals made, not representing any particular organization.

In the end, the people who came together around the livestock-climate issue were a visible part of the march, united in their purpose but also representing a plurality of voices and approaches to the issue. The size of the group may have been small in relation to the threat that livestock emissions pose to the climate, but it was reassuring to see that these groups and individuals have become such a significant component of the food justice contingency.

While the war of ideas in the public realm has been mostly won concerning the role of humans in driving climate change, it is the implementation of meaningful policy in this area that is lacking, in large part because of the active state role and government funding that will have to go into transforming the way we produce energy for an expanding and increasingly affluent world population. In contrast, the war of ideas has not been won in terms of livestock’s role in climate change. Before any significant reductions in global livestock production can occur, strong public awareness needs to be developed around the issue. With such awareness, mitigating livestock emissions will be a very low-hanging fruit in efforts to reduce overall global emissions, requiring no new technological breakthroughs or massive infrastructure investments; people can adopt a plant-based diet, or at least reduce their overall meat consumption, without relying on state action.

So perhaps the greatest value of the significant livestock-climate messaging in Sunday’s march was that it helped inform some of the well-meaning advocates within the Good Food Movement about livestock’s prominent role in climate change. Getting this movement on board with the livestock-climate issue will be a key tool in winning the initial war of ideas that sustainability and a healthy climate are incompatible with high consumption of animal-derived foods. Once this consensus has been built, transitioning to climate-friendly diets will be much less daunting than transforming our energy sector.