Superstorm Sandy: What if storms like this can be prevented? 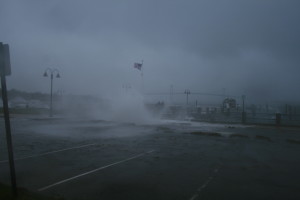 Superstorm Sandy: What if storms like this can be prevented (by changing what we eat)?
By guest blogger Chiara Cabiglio, also posted at
http://everyonesharvest.wordpress.com/2012/11/01/superstorm-sandy-what-if-storms-like-this-can-be-prevented/

Superstorm Sandy has caused at least 157 human deaths as of midday November 1st. Its impacts include flooding oflower Manhattan and large swaths of New York City’s subway system. News reports had previously predicted that such events might occur only in 2080, based on a 2011 New York State government report.

Reporters and scientists are exploring whether climate change might have intensified Superstorm Sandy. Hurricanes would occur even in the absence of climate change. But scientists are connecting Sandy’s intensity with the same climate disruption that generated record drought in the summer of 2012, which caused “severe pain” among both crop-growers and livestock farmers. Similarly, scientists are warning that Sandy could yield “life-threatening” results among poultry flocks on the East Coast.

So the only pragmatic way left to reverse climate change before it’s too late, say World Bank environmental advisor Robert Goodland and his colleague Jeff Anhang, is through large-scale reforestation and regeneration of forest to absorb today’s excess atmospheric carbon –- combined with replacing at least 25% of today’s livestock products with better alternatives (notably, meat substitutes). That way, lots of greenhouse gas emissions attributable to livestock would be significantly reduced at the same time as new trees would sequester excess atmospheric carbon.

Yet many people still think that sustainability in food is achieved by buying “organic” or “grass-fed” meat. However, grass-fed cows emit up to 400% more methane than do grain-fed cows, and they take up much more land, so they yield much less forest available to absorb atmospheric carbon. Anyway, most marketing of “grass-fed” beef is a scam — and that’s according to a “grass-fed” producer who touts himself as a rare, honest marketer of grass-fed meat. Yet that producer can’t show his buyers any better certification than can his competitors who he says are scammers.

Indeed, any producer can keep animals on grass all day long –- but then when night falls and it’s hard to observe, quickly feed them grain.  There’s no practical way to certify that an animal has been 100% grass-fed unless an independent observer would watch each animal 24/7.  But of course it’ll never be close to economically possible to do so. Yet the premium for meat marketed as grass-fed is commonly 200-300%.  So there’s an overwhelming incentive for a producer to cheat.

Meanwhile, some people promote Meat Free Mondays. Yet since that campaign began in 2003, survey data show a sharp dropin the number of Americans consuming less meat –- even though meat consumption has historically fallen during economic downturns. Meatless Monday’s own website provides a reason for such failure:  its framing of the issue is anachronistic, based on World War I deprivation. In fact, when people are asked to sacrifice something one day, they often crave it more the next day.

Indeed, no consumer product is ever successfully marketed by asking consumers to use it just one day a week. For example, little to no Pepsi-Cola would be sold by prodding consumers to drink it one day a week, conceding that Coca-Cola remains the drink of choice the rest of the week. It’s been suggested that a campaign would do better by being based on the value ofproducts that are better than meat.

Some people debate whether Goodland and Anhang’s estimate that at least 51% of human-caused greenhouse gas is attributable to livestock may be too high, and prefer to use the Food and Agriculture Organization’s (FAO) 18% estimate –- even though the FAO promotes more factory farming, not less, and has partnered with the meat industry to prove it.

The validity of Goodland and Anhang’s conclusion can be grasped simply by considering the estimate by the International Livestock Research Institute –- which normally promotes livestock -– that 45% of land on earth is now used for livestock and feed production. That so much land is used for livestock and feed production suggests it’s correct for Goodland and Anhang to conclude that replacing 25% of today’s livestock products with better alternatives would both reduce emissions and allow forest to regenerate on a vast amount of land, which could then absorb excess atmospheric carbon to reduce it to a safe level. This may be the only pragmatic way to reverse climate change in the next 5 years as needed, and avert future superstorms like Hurricane Sandy.

Therefore, the food industry may be the key player in determining whether climate change is reversed or not. Consumers have the power to create positive change in the food industry by voting with their forks: by replacing meat and dairy products with meat and dairy alternatives, in particular by choosing more grains, legumes, fruit and vegetables.

If we ignore Mother Earth’s warning this time, then it could prove utterly catastrophic for us all. If we want to save ourselves from climate change, then we must consider changing the way we eat, the way our food is produced, and what food is produced. Period.