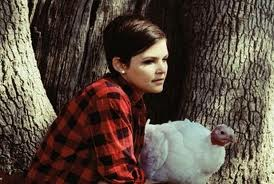 It turns out that there’s actually a way to address climate change through Americans’ enjoyment of turkey this Thanksgiving. It’s based on the following facts.

First, if climate change continues to worsen, then we may have less to give thanks for in the coming years, as climate change imperils agricultural production. Climate change also exposes hundreds of American cities – including New York, Miami, and Los Angeles – to catastrophic flooding, and we may no longer be able to control outcomes if we don’t reduce greenhouse gas significantly in our atmosphere by 2020 or at the latest 2026.

So on Thanksgiving this year, we might do well to consider replacing animal-based turkey with vegan “turkey.”  There are many makers of such “turkey,” including VegetarianPlus and Gardein and Tofurky.  These are climate-friendly because any foods that come directly from plants are generally not responsible for high levels of greenhouse gas emissions as are animal-based foods.  After all, animals such as turkeys emit greenhouse gases, while plants used to make vegan “turkeys” actually absorb greenhouse gases from our atmosphere.

Frankly, it’s too late to reverse climate change by replacing fossil fuel infrastructure with renewable energy infrastructure. To implement that strategy at the necessary scale, it’s estimated we’ll need 53 trillion dollars and 20 years, long past the time by which it’s said we must reduce greenhouse gas significantly.

In other words, addressing climate change by replacing animal-based foods with alternatives may be the only pragmatic way to reverse climate change before it’s too late.

Robert Goodland, former lead environmental advisor at the World Bank, has explained how we can reduce atmospheric carbon to a safe level by replacing between 50 and 85% of today’s animal-based foods with foods made from plants.

No other pragmatic action to reduce greenhouse gas significantly by 2020 or 2026 as needed has even been proposed.

Some people will predictably doubt whether large-scale switching from animal-based foods to plant-based ones can really happen by 2020 or 2026. But it surely can happen if one thinks of animal-based foods as being obsolete in our modern age of climate change.

For example, tube TVs and horse-drawn carriages were widely loved in their heydays – yet once they were perceived as obsolete, they were completely replaced within a few years by automobiles and digital TVs.

The reason why changing our foods may be only pragmatic way to reverse climate change comes from the fact that the only known way to draw down atmospheric carbon on a large scale in a relatively short timeframe is by growing a large number of trees. In fact, raising animals for food is estimated to occupy 45% percent of all land on earth, and most of that land was once forested – and it can be reforested, allowing trees to draw down carbon from our atmosphere on a massive scale.

If replacing animal-based foods with better alternatives because of greenhouse gas emissions sounds like a radical proposition, in fact it’s been proposed by eminent Americans such as Bill Gates, Leonardo DiCaprio, Emily Deschanel, and Russell Simmons.

So this Thanksgiving, it makes sense to think about how eating a new type of turkey might save our world.