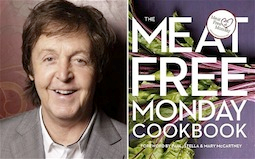 Signed copies of the “Meat Free Monday Cookbook” by Paul, Mary, and Stella McCartney will go to the two people who donate the most money to the “No More Bull” crowdfunding campaign

Designed to slow climate change — before it’s irreversible — No More Bull includes a crowdfunding component created in partnership with the nonprofit organization A Well-Fed World.

The goal is to raise a minimum of $500,000 to develop activities that inspire people through music to accompany events including Live Earth 2015 on June 18 — created by Al Gore, Kevin Wall, and Pharrell Williams. If enough funds are raised, No More Bull will also help develop activities for this year’s United Nations Climate Change Conference, which will be held in Paris from Nov. 30 to Dec. 11.

Their findings achieved international acclaim following publication in the award-winning magazine World Watch in November/December 2009, in an article, entitled: Livestock and Climate Change: What if the key actors in climate change are … cows, pigs, and chickens?

And in 2011 Goodland and Anhang co-founded ChompingClimateChange.org, to promote their analysis of how to slow climate change through food and forestry.

Understanding the Facts: Why It’s Time to Say “No More Bull”

Anhang and Goodland have continued to focus on food and climate change, and in recent years have expanded their original assessment:

“Today’s worldwide concentration of atmospheric carbon is the highest in recorded history, and is considered by experts to be unsafe — yet it is rising steadily. As long as today’s broad international disagreement continues on the required large-scale steps for reducing usage of fossil fuels, it seems clear that substantial reductions in GHG emissions in most sectors will be difficult to achieve.”

They explain that the livestock sector is responsible for a significant amount of greenhouse gas (GHG) emissions not attributable to usage of fossil fuels.

As a result, “The goal of climate treaty negotiations should be to eliminate one quarter of livestock consumption, which would allow forests to regenerate on the vast areas of land now set aside for cattle grazing and feed production,” they suggest.

Regeneration of forests is the only known way to create new large-scale capacity to sequester today’s atmospheric carbon,” they insist. “Our case may be the only pragmatic way to significantly address climate change before it becomes catastrophic.”

Take Action: Be the Change You Wish to See in the World

Environmental agencies warn that if we don’t significant reduce greenhouse gas emissions by 2020, there may be no way to reverse the trend.

That’s why Paul McCartney’s Meat Free Monday campaign makes so much sense. Since 2008, he has been talking about the impact of livestock production on climate change and what can be done about it. He spoke about climate change most recently at the March 2015 Bloomberg Philanthropies event, Road to Paris.

By supporting the No More Bull crowdfunding campaign, you will:

There are two ways to donate now to No More Bull:

Chomping Climate Change addresses the failure of politicians for more than 20 years to implement international policies on climate change. As a result, many people don’t trust politicians on climate change. Chomping Climate Change provides a unique, widely cited analysis of how to address climate change through food and forestry, based on environmental assessment performed by two World Bank Group environmental specialists — Jeff Anhang and the late Robert Goodland. The World Bank Group is the part of the United Nations system that’s focused on improving people’s lives through international development. Learn more about this No More Bull video.

About A Well-Fed World

A Well-Fed World is a hunger relief and animal protection organization founded in 2009. In addition to its advocacy, it works through a partnership network to distribute vegan food to people in need, build food gardens in low-income countries, and strengthen farm animal care and rescue. Learn more at awfw.org.

Take a Bite Out of Climate Change With the “No More Bull” Crowdfunding Campaign was last modified: October 24th, 2019 by admin
Share this post