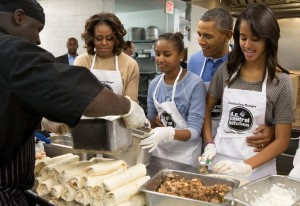 According to two UN entities, the Intergovernmental Panel on Climate Change and the International Energy Agency, the concentration of greenhouse gas (GHG) in our atmosphere may rise to irreversibly catastrophic levels by 2020 – or at latest 2026 – if nothing is done to change course.

However, according to analysis by environmental specialists employed by two other UN entities, the World Bank and International Finance Corporation, there is a pragmatic opportunity to stop climate change by replacing about 25% of today’s livestock products with better alternatives by 2017 (or no later than 2020). Those environmental specialists are Jeff Anhang and me.

According to some analysis, climate change poses a grave risk to the world’s food supply. But in our assessment, today’s food supply is more a cause than a victim of climate change. That’s because we’ve performed a thorough assessment of all GHGs in the lifecycle and supply chain of livestock products– and in doing so, we’ve found that at least 51% of human-induced GHGs are actually attributable to livestock products.

In contrast, the UN Food and Agriculture Organization (FAO) published a report recently saying that livestock are responsible for 14.5% of human-induced GHG emissions– and the world should expect a 70% increase in livestock production by 2050. According to the report, GHG emissions from the livestock sector are set to increase from the current 7.1 gigatons per year to 8.5 gigatons per year – but only if farmers cut emissions from livestock by 30%, through adoption of more efficient breeding and feeding practices.

Even if one accepts the FAO’s fantastic claim, its projected 70% increase in livestock products by 2050 would result in more GHGs attributable to livestock in 2050 than today. Yet governments have called on all industries worldwide to eliminate 80 to 95% of human-induced GHGs by 2050 compared to 1990.

Also, the FAO has failed to explain how its new report determined that emissions attributable to livestock have dropped from the level of 18% of human-induced GHG emissions estimated by the FAO in 2006 to the level of 14.5% estimated in its report published last month.

The FAO has more generally failed to use basic principles of environmental assessment. Notably, it has examined risks involved in such areas as air and water pollution, and has claimed that those risks must be balanced with benefits available from raising livestock. Such an assessment fails to separate livestock’s lesser risks and impacts from their greater ones – a basic task of environmental assessment. The greatest environmental risks are normally defined as those that are diverse, irreversible, and unprecedented – which, in this case, aren’t associated with air and water pollution but with climate change.

Also, the FAO has assessed only livestock products and has failed to perform any analysis of alternatives, another basic element of environmental assessment.

Conversely, our analysis identifies a unique dual benefit of replacing a substantial amount of today’s livestock products with alternatives. That is, such replacement can both significantly reduce GHG emissions and free up land to permit reforestation that would provide large-scale GHG sequestration. Much land used for livestock and feed production was once forested, and could be forested again.

The FAO’s analysis omits counting carbon dioxide from livestock respiration. However, reality no longer reflects the old model of the carbon cycle, in which photosynthesis balanced respiration. That model was valid as long as there were roughly constant levels of respiration and photosynthesis on Earth. In recent decades, respiration has increased exponentially with livestock production, while intensified livestock and feed production has been accompanied by large-scale deforestation and forest-burning, huge increases in volatilization of carbon, and a dramatic decline in both Earth’s photosynthetic capacity and its GHG sequestration capacity.

200 tons of carbon per hectare are typically stored in forest, and are at risk of being released through deforestation. Indeed, all of that carbon is regularly released when forest is burned to create pasture for grazing livestock or cropland for growing feed for livestock. Moreover, an additional 200 tons of carbon per hectare (or more) are typically stored in the soil beneath, and are at risk of being released when the forest above it is degraded. It’s estimated that each year between 2000 and 2010, an area larger than England (about 1.3 million hectares) was deforested.

As a result, either carbon dioxide in livestock respiration – or its reflection in carbon absorption forgone on land used for livestock and feed production –should be counted as emissions.

The only way for most industries to reduce GHG emissions on a large scale is by using renewable energy. But studies show that sufficient renewable energy infrastructure to stop climate change would take at least 20 years and cost $53 trillion to develop.

The livestock sector is a notable exception among industries, as the bulk of its GHG emissions are not from energy usage, but from biological processes. So it’s easier, and therefore, especially important to achieve a large and rapid reduction in GHGs from the livestock sector.

The objective of recent international climate treaty negotiations has been to reduce GHG emissions by about 13% by 2017. If, as our research shows, at least 51% of human-induced GHGs are attributable to livestock, then we could meet the treaty target by replacing about 25% of today’s livestock products with alternatives by 2020 (or no later than 2026).

After all, while our food supply is not merely a victim of climate change, it certainly has begun to suffer from climate change through large-scale die-offs of livestock and crops that feed them. As a result, regardless of whether our numbers of the FAO’s are more reliable, at least some amount of today’s livestock populations can be seen as being obsolete in the age of climate change.

If we think of alternatives to livestock products as analogous to digital communications, then we can consider how tube TVs, for example, were completely replaced within 5 years when they became viewed as being obsolete in the age of digital technology.

There is documented potential for agricultural change to draw down atmospheric carbon to pre-industrial revolution levels within 5 years, by stopping deforestation and prioritizing reforestation. Doing so while simultaneously replacing a substantial amount of livestock products with better alternatives may be the only pragmatic way to halt climate change within the few years remaining before climate disruption becomes irreversible.

Alternatives to livestock products can range from whole grains and legumes to an array of fancy meat and egg substitutes made from such items as peas, sorghum, and beans. Such products are generally responsible for minimal GHG emissions.

Indeed, one of the advantages of replacing livestock products today versus replacing fossil fuel infrastructure is that it is easy for any individual consumer to do the former on their own, unlike the latter.

Still, to ensure that sufficient action is taken, governments should develop policies to provide incentives for replacing at least 25 percent of today’s livestock products with better alternatives by 2020 (or no later than 2026).

Finally, replacing at least 25 percent of today’s livestock products with better alternatives by 2020 (or no later than 2026) may be the only available business case for industry leaders to act pragmatically to stop climate change before it is too late.

[1] World Bank, 1818 Society, 1818 H Street NW, Washington, Washington DC 20433. Robert Goodland served as lead environmental adviser at the World Bank Group, and is the first ever winner of the World Conservation Union’s Harold Coolidge medal for lifetime achievement in the conservation of nature and natural resources.