Guilt-Free Memorial Day Cookouts in the Age of Climate Change 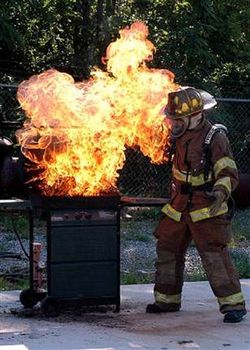 Backyard cookouts are a hallmark of Memorial Day. Inevitably, this means burning gas or charcoal, each of which emits significant amounts of greenhouse gases. Yet according to a new projection in the New York Times, large-scale melting of ice in the Antartica is now almost inevitable, and this phenomenon could cause “enough sea-level rise that many of  the world’s coastal cities would eventually have to be abandoned.”

However, preventive measures that can still allow cookouts are proposed in a separate new article in the journal Global Change Biology. These measures would involve reforesting as much as possible of the 45% of all land on earth now estimated to be used for raising livestock. Most land used for livestock was once forested and could be reforested again, allowing it to absorb excess greenhouse gas in the atmosphere.

According to the new proposal, if livestock products such as grilled beef and chicken are replaced with alternative products —such as Gardein burgers or cutlets, Field Roast sausages and Morningstar riblets — this could generate a unique dual benefit. Greenhouse gas attributable to livestock can be significantly reduced, and at the same time, the huge amount of land used for livestock could be freed up for reforestation and absorbing greenhouse gas in the atmosphere.

Using renewable energy to achieve the same outcome wouldn’t be possible, according to the International Energy Agency, which has estimated that sufficient renewable energy would cost at least $18 trillion and take at least 20 years. This would be long past the time available to stop the rapid melting of Antarctic.

There is documented potential for agricultural change to draw down greenhouse gas from our atmosphere to pre-industrial revolution levels within five years.

Agriculture is outdoors to a unique degree, exposing it to greater risk from emissions attributable to livestock than any other industry’s risk from the same  emissions. So food industry leaders can be seen to have a compelling commercial incentive to reduce those emissions.

For consumers, Bill Gates has been promoting the idea that we can stop climate change by replacing livestock products with alternatives with little or no change in taste. This way, on Memorial Day, by dramatically reducing greenhouse gas emissions attributable to our foods, we can more than make up for the gas or charcoal that we may continue to use to prepare these foods.

Guilt-Free Memorial Day Cookouts in the Age of Climate Change was last modified: January 1st, 2015 by admin
Share this post