According to new data published by the U.S. Department of Agriculture, the production of animal-based meat has been dropping worldwide since 2018.

The trend of declining livestock production stands in sharp contrast to analysis from the Food and Agriculture Organization (FAO), a UN specialized agency.  The FAO’s agricultural outlook for 2020-2029 states that “protein from animal sources are expected to account for a greater share of total daily per capita availability.”

FAO analysis has such an attentive audience that even vegetarian and vegan activists have long subscribed to the idea of ever-greater increases in livestock production.  Just in the past year, one activist wrote “the world is eating more and more meat,” while another has been quoted saying:  “On our current trajectory, meat production just goes up and up.”  In context, both quotes relate only to animal-based meat, to the exclusion of plant-based meat.

This pattern of markedly lower livestock production was not foreseen by the FAO’s agricultural outlook for 2020-2029, which states:  “Growth in animal protein consumption will be particularly pronounced in upper middle- and lower middle-income countries.. [and] consumers in lower middle-income countries increase their consumption of animal protein faster than consumers in any other income group.

Preliminary data collected during the ongoing Covid-19 pandemic suggest that various aspects of the pandemic may have induced an even greater drop in the consumption of livestock products from 2020-2021 than from 2018-2020.

It has been explained that before the Covid-19 pandemic began, the worldwide drop in livestock production was likely caused by climate change, as disruptive climate events were increasingly causing large-scale die-offs of livestock and crops that feed them in every region of the world.  Disruptive climate events have been projected to increase in intensity and frequency in the coming years.

To the extent that an increasingly vegan world is being driven by disruptive climate events, part of the story would surely be bad news.  But the good news would be that massive subsidies for plant-based meat and radical policy changes to veganize the world may not be needed, though vegan and vegetarian activists commonly promote them.

It is perhaps paradoxical that vegan and vegetarian activists seem enamored with analysis from the FAO, as the FAO has been partnered since 2011 with all of the world’s major livestock industry associations, in supposed efforts to account for greenhouse gas emissions attributable to livestock production.

FAO livestock specialists, in their partnership with the livestock industry, have tried to drown out World Bank Group environmental specialists – who have explained that only replacing livestock products with better alternatives can provide the dual benefits of dramatically reduced livestock emissions accompanied by huge drawdowns of atmospheric carbon, as much of the vast amount of land now used for livestock production can be reforested.

If all goes well, catastrophic climate change will be averted by the speedy and massive replacement of livestock products with better alternatives. 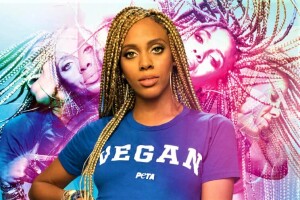