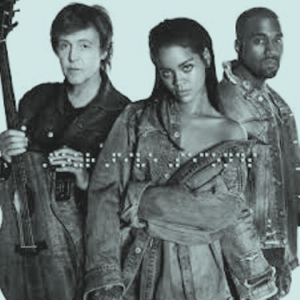 Anyway, if climate change it not controlled, then it’s projected that it may imperil major cities across the world, including Paris, New York, London, and Dubai.  Yet climate experts generally seem pessimistic about the new agreement – and there may be good reason for that.  The Kyoto Protocol promised reduced greenhouse gas emissions for each year following the baseline year of 1990;  but over the next 20+ years, emissions increased by more than 60 percent.

Members of the public are often less interested in climate experts than in celebrities.  And in general, celebrities have not proposed any clear pathway for reversing climate change.  Nevertheless, there is clarity coming from at least one celebrity.

Notably, Sir Paul McCartney has been examining issues relating to climate change seriously since the 1990s, and last week he wrote, “the livestock industry is responsible for a massive percentage of greenhouse gases in the earth’s atmosphere… Together we can all make a difference.  Love, Paul.”

Of course, Paul McCartney is known mainly as a star in the world of music, and his most recent hit song was recorded with Rihanna and Kanye West, titled FourFiveSeconds.  In fact, that song title could be considered a metaphor – as climate change is projected to become irreversible as soon as the year 2020, if greenhouse gas emissions aren’t reduced significantly in the next few years – which means that to do the needful, we may have four, five years at most.

In Sir Paul’s assessment, people can start to reverse climate change immediately by enjoying delicious alternatives to animal-based foods.  Such alternatives are becoming more widely available, made from grains, legumes, and nuts – such as peas, soybeans, and almonds – and they can be homemade too.

It is widely recognized that replacing animal-based foods with plant-based ones can have a large positive effect on climate change.  Indeed, plant-based foods offer two major benefits:  They not only reduce greenhouse gas emissions, but they also free up land on which we can grow more trees, which can draw down excess carbon from our atmosphere.

Now, replacing enough fossil fuel infrastructure to reverse climate change is projected to take long past the projected “tipping point” of 2020.  Specifically, it is estimated to take at least $36 trillion and 20 years.  That would take us at least to the year 2035 – and such a timeline is unlikely, as it would be met only if massive investments not required by the new Paris agreement were quickly begun.

Yet already, negative impacts from climate change appear to be increasing in frequency and severity.  This is most apparent in the part of the world’s economy that depends on a stable climate more than any other sector;  that’s the agricultural sector.  Indeed, droughts and other disruptive climate events have directly and increasingly caused large-scale die-offs of livestock and crops that feed them.

At this point, it could be assumed that agricultural profits exceed losses – but the pork industry, for example, recently suffered through three years of net negative returns.

One basic reason for policymakers to meet at climate conferences is that it has been generally assumed that climate change can be addressed only with new policy, rather than a business case, given the huge costs of fast-tracking the replacement of fossil fuel infrastructure.

However, a business case for plant-based foods to reverse climate change appears to be gaining steam, and among those who have subscribed to it is Bill Gates.  This business case reflects the cost of producing the vast amounts of crops needed to feed animals raised for food.  It takes more than two pounds of crops – in fact, up to 6 pounds – to produce one pound of animal-based meat.

The biggest challenge may be to get people to try the latest alternatives and taste how delicious they can be.  Yet if climate change continues to disrupt agriculture all over the world, then alternatives to animal-based foods may not even be much of a choice in the long run.

Nevertheless, by choosing plant-based foods voluntarily right now, we may be able to start reversing climate change before it’s too late.

This does not mean that replacing livestock products with alternatives should be people’s only concern regarding climate change.  There is also a case for replacing fossil fuels.

However, replacing animal-based foods with better alternatives may be the only pragmatic way to start reversing climate change by 2020 as needed.  Whereas it’s practically impossible to replace fossil fuel infrastructure quickly, there is a long and strong track record of developing and marketing new food products quickly to respond to new scientific findings.

So regardless of skepticism about the new climate agreement, there is still hope to start reversing climate change – with our forks.  Stay tuned to the encouragement that we will keep on providing on our Chomping Climate Change website and our Facebook page.

[Two days after publication of this posting, it was publicized by Paul McCartney’s Meat Free campaign.] 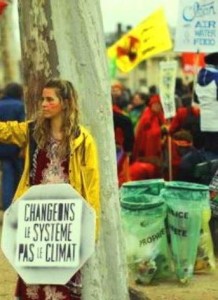 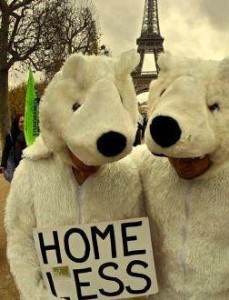